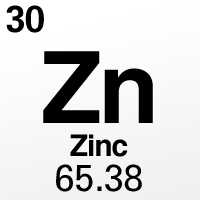 There are between 2 and 4 grams of zinc distributed throughout the human body. Most zinc is in the brain, muscle, bones, kidney, and liver, with the highest concentrations in the prostate and parts of the eye. It is a key factor in proper prostate function and reproductive organ growth.

Zinc reacts with a great number of organic molecules in the body: it has been estimated that about 10% of human proteins potentially bind zinc, in addition to hundreds more which transport and traffic zinc. It also plays a role in the metabolism of DNA, RNA and gene expression.

In the brain, zinc is known to modulate brain excitability, and plays a key role in synaptic plasticity (and thus in the ability to learn).

Refined food is low in zinc, however good sources are herring, oysters, clams, wheat bran, oatmeal, liver, red meats (especially beef, lamb and liver) and chicken thighs. Vegetarians run a high risk of zinc deficiency as the concentration of zinc in plants varies based on levels of the element in soil. When there is adequate zinc in the soil, the food plants that contain the most zinc are wheat (germ and bran) and various seeds (sesame, poppy, alfalfa, celery, mustard). Zinc is also found in beans, nuts, almonds, whole grains, pumpkin seeds, sunflower seeds and blackcurrant.

Zinc deficiency affects about two billion people worldwide and contributes to the death of about 800,000 children worldwide per year.