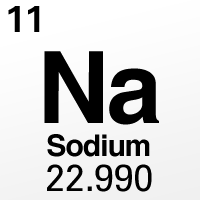 The most common source of sodium in the diet is sodium chloride ('table salt'), which is used for seasoning and warm-climate food preservation, such as pickling and making jerky. Most people consume far more sodium than is physiologically needed – often ten times as much.

Sodium ion is soluble in water in nearly all of its compounds, and is thus present in great quantities in the Earth's oceans and other stagnant bodies of water. Due to this solubility in water, sodium readily leaches into rain water and, as a result, is relatively rare on land. Sodium is an essential element for all animal life and this requirement, coupled with its scarcity in many inland soils, has lead many animals to develop a special taste receptor for sodium ion.

In the human body, sodium ions are used in opposition to potassium ions, to allow the organism to build up an electrostatic charge on cell membranes, and permit the transmission of nerve impulses. Sodium ions are therefore critical for proper brain and nerve function, and in influencing osmotic balance between cells and the interstitial fluid.

Levels of sodium in hair samples in excess of 1000ppm are generally found in unhealthy patients. Levels above 2000ppm are often seen in the terminally ill.