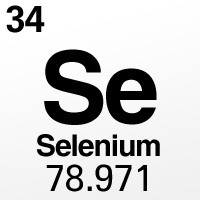 Selenium poisoning of water systems may result whenever new agricultural runoff courses through normally dry undeveloped lands. This process leaches natural soluble selenium compounds into the water, which may then be concentrated as the water evaporates. High selenium levels have been found to have caused certain congenital disorders in wetland birds.

Although toxic in large doses, selenium is an essential micronutrient for human health. In humans, selenium is a trace element nutrient which functions (indirectly) as an anti-oxidant and enhances immune activity. Selenium also plays a role in the proper functioning of the thyroid gland.

Selenium deficiency is relatively rare in well-nourished individuals but it can occur in the elderly (over 90) and in patients with compromised intestinal function. People dependent on food grown from selenium-deficient soil are also at risk.

Several studies have suggested a possible link between cancer and selenium deficiency, showing both that higher levels of selenium were correlated with a decreased risk in the development of tumors, and that selenium can affect gene expression and can act as a tumor suppressor. There is also evidence that selenium supplementation can help chemotherapy treatment by enhancing the efficacy of the treatment, reducing the toxicity of chemotherapeutic drugs, and preventing the body's resistance to the drugs.

Studies of the immune system in AIDS patients has shown that low selenium levels such patients strongly correlates with decreased immune cell count and increased disease progression and risk of death. Similarly, research has suggested that selenium supplementation can help prevent the recurrence of tuberculosis.

Experimental findings have demonstrated a protective effect of selenium on mercury toxicity.