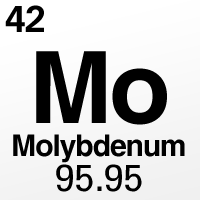 Molybdenum concentrations affect protein synthesis, metabolism and growth as they play a role in the regulation of nitrogen, sulfur and carbon cycles. Molybdenum is also present within human tooth enamel and may help preventing its decay.

A diet low in molybdenum – where foods are grown from soil deficient in the mineral – has been associated with increased rates of esophageal cancer.

High levels of molybdenum can interfere with the body's uptake of copper and can result in copper deficiency. Molybdenum prevents plasma proteins from binding to copper, and it also increases the amount of copper that is excreted – a condition that can be aggravated by excess sulfur.

Animal studies have shown that chronic ingestion of more than 10 mg/day of molybdenum can cause diarrhea, growth retardation, infertility, low birth weight and gout; it can also affect the lungs, kidneys and liver. High levels have been associated with Type I Diabetes in humans.

Molybdenum dusts and fumes, which are produced by mining or metalworking industries, can be toxic. Low levels of prolonged exposure can cause irritation to the eyes and skin and chronic exposure can result in fatigue, headaches and joint pains.