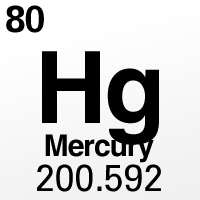 Fish and shellfish have a natural tendency to concentrate mercury in their bodies and species that are high on the food chain – species such as shark, swordfish, king mackerel, albacore tuna, and tilefish – contain higher concentrations of mercury than others (a process called biomagnification). Those consuming high levels of fish should be aware of the symptoms of mercury poisoning.

Mercury and most of its compounds are extremely toxic and can cause both chronic and acute poisoning. It is absorbed by the body both through inhalation and through contact with the skin. Mercury concentrates in the thyroid and the kidney causing permanent neurological and kidney impairment. Toxic levels affect the cerebral cortex and pass from mother to child resulting in birth defects including cerebral palsy and developmental disabilities.

In cases of chronic exposure, even at low concentrations, it can lead to tremors (which involve the hands and later spreads to the eyelids, lips, tongue and which can escalate to violent muscular spasms), impaired cognitive skills, irritability, excitability, excessive shyness, depression, fatigue, loss of memory, and sleep disturbance (insomnia, vivid dreams). Elevated exposure over short periods (4 to 8 hours) can result in chest pain, cough, impairment of pulmonary function, and pneumonitis. Acute exposure has also been shown to cause significant damage to the central nervous system, causing delirium, hallucinations, and suicidal tendency.

High levels of Mercury in the body have also been linked to asthma, hypothyroidism, impaired immune function, osteoporosis, digestive problems, learning disabilities/ADHD, emotional difficulties, hypertension and diabetes. When paired with low magnesium levels, high mercury levels may be an indication of colon cancer.