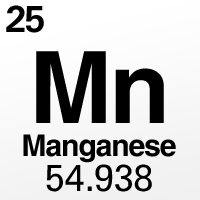 Manganese is an essential trace nutrient for all known living organisms. Manganese has been called the maternal element as studies have shown that animals deprived of this element do not nurture their young. Manganese ions function as cofactors for a number of enzymes where they are essential in detoxification of superoxide free radicals and regulating sugar metabolism, cholesterol synthesis, bone growth, energy production, and muscle and nerve conduction.

The human body contains about 10 mg of manganese, which is stored mainly in the liver and kidneys. In the human brain the manganese is bound to manganese metalloproteins.

Manganese compounds are less toxic than those of other widespread metals such as nickel and copper but can still present a health hazard, with particular risk for children. High levels – usually by inhalation – can affect insulation production (causing Type II diabetes), and is also linked to hypertension, anemia, and impaired motor skills and cognitive disorders.

A form of neurodegeneration similar to Parkinson's Disease called "manganism" has been linked to manganese exposure amongst miners and smelters since the early 19th century. Allegations of inhalation-induced manganism have been made regarding the welding industry.

Permanganate exhibits a higher toxicity and can lead to necrosis of mucous membranes, damage to the kidneys and liver, and even death if consumed in sufficient quantities (10 grams).