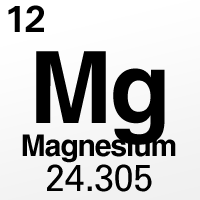 Observations of reduced dietary magnesium intake in modern Western countries as compared to earlier generations may be related to food refining and modern fertilizers which contain no magnesium.

There are a number of magnesium dietary supplements available however, magnesium oxide, one of the most common because it has high magnesium content per weight, has been shown to be the least bioavailable. Magnesium citrate is a better choice.

Over 300 enzymes require the presence of magnesium ions for their catalytic action, including all enzymes utilizing or synthesizing ATP, or those which use other nucleotides to synthesize DNA and RNA. ATP exists in cells normally as a chelate of ATP and a magnesium ion.

Magnesium deficiency is unfortunately very common, with only 32% of the United states meeting the required daily intake. It has been implicated in the development of a number of human illnesses such as asthma, bowel disease, epilepsy, chronic fatigue, osteoporosis, kidney stones, insomnia, ADHD and imbalances relating to the musculoskeletal and nervous system. Magnesium also appears to facilitate calcium absorption and intracellular magnesium is correlated with intracellular potassium.