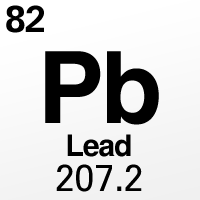 Lead may still be found in harmful quantities in stoneware, vinyl (such as that used for tubing and the insulation of electrical cords), and brass manufactured in China. Between 2006 and 2007 many children's toys made in China were recalled, primarily due to lead in paint used to color the product.

Older houses may still contain substantial amounts of lead paint. White lead paint has been withdrawn from sale in industrialized countries, but the yellow lead chromate is still in use.

Lead salts used in pottery glazes have on occasion caused poisoning, when acidic drinks, such as fruit juices, have leached lead ions out of the glaze.

Lead as a soil contaminant is a widespread issue, since lead is present in natural deposits and may also enter soil through (leaded) gasoline leaks from underground storage tanks or through a wastestream of lead paint or lead grindings from certain industrial operations.

Lead is a potent neurotoxin that accumulates in soft tissues and bone over time. Lead poisoning was documented in ancient Rome, Greece, and China. Lead(II) acetate (also known as sugar of lead) was used by the Roman Empire as a sweetener for wine, and some consider this to be the cause of the dementia that affected many of the Roman Emperors.

Lead poisoning can follow from ingestion of food or water contaminated with lead or through accidental ingestion of contaminated soil, dust, or lead based paint (most cases of adult elevated blood lead levels are workplace-related). Lead affects almost every organ and system in the body, targeting primarily the central nervous system but also the cardiovascular system, kidneys, and the immune system. Long-term exposure will cause significant impairment to the nervous system, severely damage the brain and kidneys and, in cases of exposure to high lead levels, ultimately cause death. It may also cause colic-like abdominal pains, bone diseases, fractures, learning disabilities, anemia, increases in blood pressure, and weakness in fingers, wrists, or ankles.

In pregnant women, high levels of exposure to lead may lead to miscarriage. Chronic, high-level exposure in men can damage the organs responsible for sperm production.

Children are particularly susceptible to the effects of lead poisoning where, even at extremely low levels of exposure, it can cause learning disabilities and other cognitive deficits. There appears to be no detectable lower limit, below which lead has no effect on cognition. High blood and tissue levels are also associated with delayed puberty in girls.