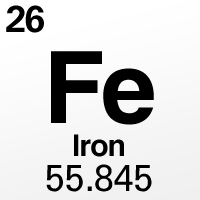 Iron is most available to the body when chelated to amino acids - iron in this form is ten to fifteen times more bioavailable than any other. Often the amino acid chosen for this purpose is the cheapest and most common amino acid, glycine, leading to "iron glycinate" supplements.

Effective iron ingestion may be hampered by red wine, coffee, and antacids.

Iron is essential to nearly all known organisms and a vital element to many biological functions. In cells, iron is generally stored in the centre of metalloproteins, because "free" iron can catalyse production of toxic free radicals which are highly reactive and can damage DNA, proteins, lipids, and other cellular components.

In humans (as well as in many other animals, plants, and fungi) iron is often the metal ion incorporated into the heme complex. Heme is an essential component of cytochrome proteins and of oxygen carrier proteins such as hemoglobin. Iron also plays a crucial role in energy production in the cells and for detoxification. Low iron levels are often found in those with low energy and irritability.

Despite being vital to many biological functions, iron has a high potential for biological toxicity – as the human body has no regulated physiological means of excreting iron. Only small amounts of iron are lost daily due to mucosal and skin sloughing, so control of iron levels is mostly by regulating uptake.

The distribution of iron within the body is also strictly regulated as many bacteria require iron, so restricting its availability (generally by sequestering it inside cells) can help to prevent or limit infections.

Large amounts of ingested iron can cause excessive levels of iron in the blood. Iron typically damages cells in the heart, liver and elsewhere, which can cause significant adverse effects, including coma, metabolic acidosis, shock, liver failure, coagulopathy, adult respiratory distress syndrome, long-term organ damage (particularly the liver, pancreas and testes), and even death.

Regulation of iron uptake is impaired in some people as a result of a genetic defect which can also lead to iron overload. Many people have a genetic susceptibility to iron overload without realizing it or being aware of a family history of the problem. Such diseases are thought to affect between 0.3 and 0.8% of Caucasians.

The medical management of iron toxicity is complex, and can include use of a specific chelating agent called deferoxamine to bind and expel excess iron from the body. MRI studies have found that iron accumulates in the hippocampus of the brains of those with Alzheimer's disease and in the substantia nigra of those with Parkinson disease.