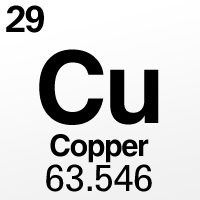 Sources of copper in food include meats, nuts, seeds, grains, beans and chocolate. Food rich in copper should be eaten away from any milk or egg proteins as they block absorption.

Copper metal and alloys were known to some of the oldest civilizations on record and have a history of use that is at least 10,000 years old. This useful metal is valued for its properties as a thermal and electrical conductor, and is used as a building material and in alloys that find their way into a wide array of products. Copper 2+ ions are soluble in water, where they function as anti-bacterials and fungicides. For this reason, alloys containing sufficient copper (more than 65% nominal copper content) can be used as an anti-germ surface that can add to the anti-bacterial and antimicrobial features of buildings such as hospitals.

The 2+ copper ion is an essential trace nutrient to all higher plant and animal life. In animals, including humans, it is found widely in tissues, with concentration in liver, muscle, and bone. It functions as a co-factor in various enzymes and plays a critical role in biological electron transport.

Because of these important roles copper plays in the body, proper levels of copper in the body are essential for healthy arteries, pigments in hair and skin, blood formation, energy production and for neurotransmitter substances such as dopamine. Copper is also essential in regulating female fertility and preventing miscarriages. Because of its role in facilitating iron uptake, copper deficiency can often produce anemia-like symptoms.

It is believed that zinc and copper compete for absorption in the digestive tract so that a diet that is excessive in one of these minerals may result in a deficiency in the other. The RDA for copper in normal healthy adults is 0.9 mg/day although some research has suggested a higher intake of up to 3.0 mg/day.

In high concentrations, copper salts can be poisonous to virtually all organisms. Toxicity can occur from eating acidic food that has been cooked with copper cookware. However, as copper is actively excreted by body, it is unclear whether chronic copper toxicosis in humans will occur without a defect in the body’s ability to eliminate copper.

Copper metabolism and excretion is controlled delivery of copper to the liver by ceruloplasmin, where it is excreted in bile.