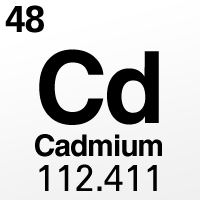 Cadmium contributes to high blood pressure, heart disease, cancer, fatigue, arthritis, violence, back pain and other conditions. Also, Cadmium and several cadmium-containing compounds are known carcinogens and can lead to many types of cancer.

In local communities where cadmium contaminated rice has occurred, itai-itai disease, and renal abnormalities were reported.

Tobaco smoking is the most important single source of cadmium exposure in the general population. It has been estimated that about 10% of the cadmium content of a cigarette is inhaled through smoking. The absorption of cadmium from the lungs is much more effective than that from the gut, and as much as 50% of the cadmium inhaled via cigarette smoke may be absorbed. On average, smokers have 4-5 times higher blood cadmium concentrations and 2-3 times higher kidney cadmium concentrations than non-smokers.

Increased levels of cadmium have also been found in marijuana smokers.

Cadmium poisoning can also be an occupational hazard associated with industrial processes such as metal plating and the production of nickel-cadmium batteries, pigments, plastics, and other synthetics. Exposure often occurs through inhalation which can initially result in metal fume fever but may progress to chemical pneumonitis, pulmonary edema, and death.

Cadmium is also a potential environmental hazard. Human exposures to environmental cadmium are primarily the result of the burning of fossil fuels and municipal wastes. However, there have been instances of toxicity as the result of long-term exposure to cadmium in contaminated food and water, as well as through car exhaust and galvanized pipes