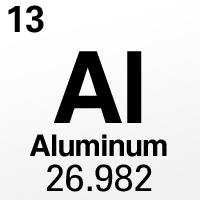 Aluminum is abundant in our environment and is found in food and beverage cans, tap water, table salt, baking powder, antacids, anti-perspirants, processed cheese, bleached flour and vaccinations and medications. Natural sources are found in peppermint, spearmint and wintergreen.

Despite its abundance – aluminum makes up about 8% of the weight of the earth’s solid surface – aluminum has no known function in living cells. It does, however, produce some toxic effects in elevated concentration – namely, it forms deposits in bone and in the nervous system (an effect which is increased in patients with reduced renal function). In very high doses, aluminum can cause neurotoxicity, can affect the functioning of the blood-brain barrier, and has been linked to neuromuscular disorders and memory impairment including Parkinson’s disease.

Aluminum has also been implicated in an increased risk of breast cancer – aluminum has been shown to increase estrogen-related gene expression in human breast cancer cells cultured in the laboratory – and has been argued to play a role in Alzheimer’s disease. Although the science on Alzheimer’s disease remains inconclusive, some brain plaques have been found to contain increased levels of the metal.

Aluminum also competes with calcium for absorption, and high amounts of dietary aluminum may produce the sort of reduced skeletal mineralization (osteopenia) observed in preterm infants and infants with growth retardation.

Aluminum allergies have been noted in a small number of patients who experience dermatitis, digestive disorders, vomiting or other symptoms upon contact or ingestion of aluminum products (e.g., antiperspirants, antacids, aluminum cookware, dyes).